Something special is worth the effort.

Something special is worth the effort.  How true, but how often does it happen these days in our modern, disposable culture?

After getting married about five years ago and while setting up home in the countryside together, I bought a very pretty but rather sad Victorian chair at auction.  My newly acquired and judiciously selected husband thought I had gone mad; it was covered in 1970’s green Draylon, with yellow plastic buttons and the legs painted with red gloss.  It was, however, beautifully proportioned and if I’m being honest, I just felt rather sorry for it.  Never a good strategy at an auction! It seemed so wrong that what was so evidently once a lovely piece had been desecrated in this way.  I had to act.

So now picture the scene…. .a rainy Sunday afternoon in the Boot Room, me armed with a screwdriver, a hammer and an old kitchen knife. All the gear but no idea – salvation at hand!  I feverishly removed the pampas Draylon having first unceremoniously severed the offending buttons.  Like a Dervish I slashed and tugged away at the horsehair, foam and even an old newspaper stuffed inside to hide a sagging form.  My husband appeared occasionally, cup of tea in hand, stared quizzically and departed without comment.  He was doubtless concerned both for my sanity and the welfare of our two somewhat alarmed Border Terriers. After a couple of hours of frenzied activity I was filthy and spent, but there it was, resplendent in its nakedness.  This restoration caper is a breeze, I thought….er…. no.  My joy at casting off the garb of the least stylish decade in history quickly faded as I realised I had no idea what to do next.  I slumped in exhausted frustration and anger.  My husband appeared this time with a stiff Gin and following a few choice comments and sensing my mood, he quickly departed with hounds in grateful tow. I’ve always admired his judgement. 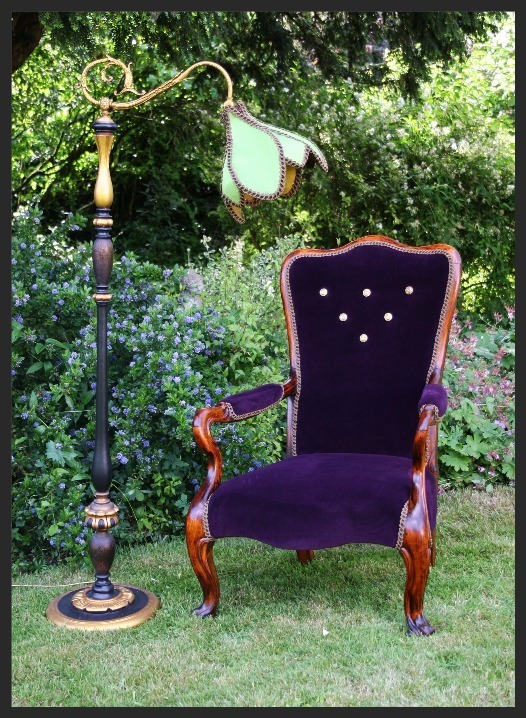 So what to do?  I had always loved antiques and chairs in particular for their varied form and well, their use. The sad, skeletal remnants of that chair implored me to learn everything I could.  So I embarked upon years of training,  gradually developing and honing my skills.  How to strip upholstery carefully to learn how shapes were originally formed, traditional techniques of hand sewing and wood polishing and much more besides.  I was also fortunate to have worked in costume and make up design for the BBC for twenty years and so had already developed a good eye for colour and colour matching.  As such I feel confident to combine contemporary, designer fabrics sympathetically with these glorious old masters to create things that will be cherished.  I also make hand-made silk lampshades for antique lamps. I work with a close friend who likewise has the passion and considerable skills both in upholstery and curtain making too.  Hare creations are always made with a smile.

The only thing I don’t do?  Repair the frames, but that’s what I have a husband for, still paying skilful penitence for those smart comments five years ago!

From our base in Salisbury , Wiltshire, we offer our Antique Chair Restoration across the South of England form London TO Somerset & everywhere between including Hampshire, Dorset, Bath, Somerset, Sussex & Berkshire.